PLAYGrounds for Success by USA

Imagine a playground full of snow in the middle of Bulgaria!

One of the coolest parts about Interski was seeing the collaboration between AASI and Burton unfold. They wanted to showcase what they believe the future of snow sports to be.

The week prior to the congress, the very experienced AASI National Team visited the local schools and spent time with the kids getting them introduced to fundamental skills relating to balance, coordination, agility and most importantly fun on a board.

Local kids to Pamporovo had the fortune of taking their skills and curiosity from the gym to the mountain from the city to a snowy playground like they have never seen before. Even though the Riglets Park caters from the 3-6 age onward, mostly 8 year olds were introduced to the purpose built park at the top of the chairlift. This was their way to showcase a prime example of Terrain Based Learning – and it worked. Local kids arriving at the Riglets Park in Pamporovo

There is a generation of young children engaging with snowboarding with the full support and attention of the US snow sports industry. Our hope – and belief – is that this generation of little shredders will develop into lifelong riders.

At first, the NZ team and I watched from a distance as we attended and delivered clinics throughout the week. It was great to see kids literally running to the entrance like it was a theme park attraction. Team USA had been sculpting gentle rollers, berms, drop-ins, boxes etc all week in preparation for the kids to experience their first time on snow.

Finally, it was time to check out what this new type of progression and experience was all about. I was introduced to a shy 4-foot, non-english speaking Daniela who’s favourite way to be pulled round the gym was left leg first. I told her that was my favourite way to go also – already we had loads in common. We picked out a board which had no bindings, simply a waist high handrail.

A few straight-runs, rollers, and berms later, Daniela was doing it on her own, easily stepping on and off the board, itching to have another play at it. Her Burton boots were easily strapped into her next board which had retractable handles on both tip and tail. After a swig of the finest Bulgarian tap-water, I was off pulling the little frother around the park up and over rollers. 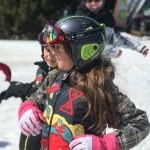 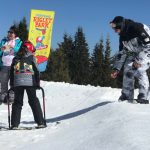 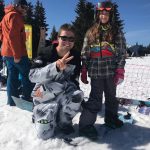 It was so cool to see her practice balancing over the board as we went on the next adventure circuit. The berms helped Daniela work out that the edges can slide and help drift to a stop in a low risk way. It was my job to keep her sliding fast enough for a buzz but not so fast to cause too many bails. A simple choice of pointing to the box or berms was all it took to keep her stoked sliding around with her friends. This is the future of snow sports!

The indoor lecture delivered by the USA essentially wrapped up everything that they did on-snow and gave more background to the Riglets Programme. A key slide from the USA indoor presentation

With this in mind, Burton and AASI have taken it upon themselves to bring snowboarding to classrooms across the USA, in the same way that they have done here in Bulgaria. The idea here is that it introduces kids to the world of snowboarding in an environment that they are already very familiar with. This removes many of the learning barriers, such as weather and protective equipment.

To summarise, Burton’s PE programme is focused on: Goals of the Burton PE programme

Watch a video on the Burton Riglets programme here.

This is a huge part of what we want to do right? Slide around with our friends? A regular snowboard lesson and progression would likely see many of the kids sitting on their ass waiting for the next sideslip. Kids love playgrounds and learning through experience, hopefully the experience is a positive and they want to return.

They were kept curious and motivated by all the colours and activities in the gym. The learning curve on snow was that much faster because of all the step-by-step challenges they had earlier. Achievement was high because they could progress to new terrain, a different board or simply see how many rollers they could pump over and in between.

It was fun connecting with kids again, especially at Interski in a foreign country. The ‘cherry on top’ was one of the mothers high-fiving me as they left. The smile on their faces, did not need translating and it was clear they had found a new place to Play.